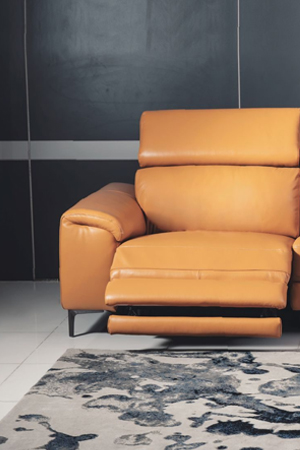 Leather Sofa has its existence for at least a few decades. Leather sofa packs a featured design that caters to both contemporary and classical lovers. However, one might now know that the earliest leather sofa was found as early as 2000 years BC, nowhere else but Egypt.

As we take a lightening look a leather sofa for granted through the years, it has emerged as an important symbol for higher executive standards, a modern life, also at times reflects the status quo. As we slowly move away from a nomadic existence where hypes catch up and move at short notices, leather sofa has never been left out of fashion. They represent a settled life of permanence, safety, elegance and comfort.

Dating backwards, the earliest leather sofa known of was found in Egypt, 2000 years BC. Many might not know, the word sofa is originated by Arabic dialect “suf-fah”, carrying the meaning of bench. These wonderful seats covered with animal skins were considered to be luxurious, made especially for the royalties (Pharaohs). Then the romans also enjoyed the lavish seating, and further improvised with different finishings, topped with carpets and tapestries. These seems to be the perfect choice for families to decorate the interiors with warm touches.

It was only not too distant ago when office and buildings became familiar in decorating their rooms with leather sofas. European designers were recorded to kick off the trend, with textile producers letting their imagination run wild. This was the era where leather sofa was popularized with pace.

During the 18th century, cabinet makers started publishing catalogues full of furniture designs. Among those, leather sofa became a hit. It was following this period of transition where the idea stopped becoming associated with luxurious elites and became a commonplace household necessity among European residence.

With innovation on machinery and equipments, factories started to put springs in leather sofas to make them more comfortable and durable. Then, manufacturers started to sew their leather sofas, to market it with a more affordable price tag. In the 1960’s designers experimented with different designs from inflatable sofas, water cushions and more to emphasize their fashion statements.

Today, the majority of Malaysian family and office premises own a sofa that is both stylishly comfortable and practical. Companies like Future Sofa manufactures leather sofa with cutting edge technology and stringent craftsmanship. Leather sofa is often seen as a work of art, we sincerely hope to see the piece of furniture to be preserved over generations.